First LeSS newsletter for 2017, so still a Happy New Year and a Happy Year of the Rooster!

I (Bas here) usually spend my New Year's day reflecting a lot on the previous year and how it fits in my overall life. Since this is the first newsletter, I'd like to start with some reflection on LeSS and the LeSS Company.

It's now two and a half year ago that Craig and I had a discussion about the state of scaling in our industry. We were still writing the LeSS book and the hype around scaling frameworks started to grow dramatically. We felt we were at a point where we had to make a choice, we'd either actively promote our scaling ideas or we keep doing what we usually do, which is focus on working with our clients. We wanted to focus on coaching as the book had already taken time away from working on products, but after discussing it more, we felt it is best to spend more effort on promoting LeSS and sharing our scaling experience.

We felt there was a lot of scaling nonsense going on and the industry needed an alternative that is less heavy and more true to the nature of agile development.

We started the LeSS Company as the entity for promoting LeSS, created the Certified LeSS Practitioner and Certified LeSS for Executive courses, put up the LeSS.works site and took time off writing to fill that with useful content for practitioners. In early 2015, now 2 years ago, I did the first LeSS Practitioner course in cold Helsinki. It wasn't great yet, but it was a good start to evolve it further.

Two years forward and many many LeSS courses further. Now, I love the evolved LeSS Practitioner course and know Craig loves how his course evolved in people exploring the systems they work in. We got an active trainer group of 15 LeSS Trainers and a wonderful community of candidate trainers. LeSS courses are happening on six continents. Dozens of LeSS case studies have been published. The LeSS book published, and saw the first LeSS Conference in 2016. Lots has happened and we expect that to continue further!

Despite an amazing two years, I wish we could have done more. We wanted to have a coaching network and the ability for companies to request suitable coaches in their location. It is still on our to-do list. Likewise, we wanted to provide a lot more value to the people who had joined a LeSS Course. A lot can be improved there still. We wanted the "becoming a trainer" process to be about mentoring. Not there yet. All of these ideas are still being worked on... wish some of them were there already. 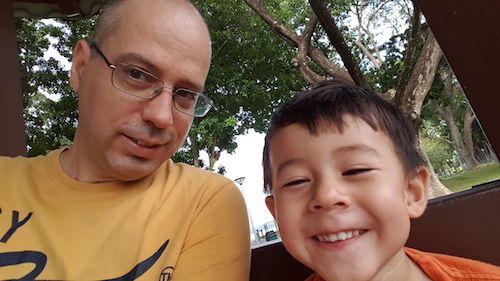 So what's next for me? With the network of great trainers, I hope to do less training myself and get more involved in the LeSS adoptions at my client. Also, I haven't wrote enough code and some of my open source projects have quite many open issues. My family hopes I'll travel less (and so do I). I'll need to do more writing, and need to work on all the things we can still improve towards the LeSS community. With all that in mind, I'm looking forward to 2017 and the year of the Rooster.

The second LeSS Conference preparations are proceeding. The most important thing to do was to fix the date. That was really hard. We managed to do so and expect the London LeSS Conference to be on 13-14 September. The registration isn't open yet, but hope to have that open in months. We're first looking for a great venue. We loved the venue in Amsterdam which was a 17th century old church on the canals. If you know a great venue like that, please let us know.

Translations for the LeSS book have been started in many languages, including Chinese, German, Spanish, and Russian. In fact, the German translation of the LeSS is already available here. I'm afraid my German isn't good enough to read the book (although German being a Dutch dialect ;P). I do hope it is of value to the German LeSS Practitioners. And thanks for Bjorn Jensen and Alexander Marquart for the translation.

The last months, there has been again a good amount of new articles on LeSS sharing experiences, techniques and opinions. Some selected articles:

A lot of case studies are currently being written, but the only new one we published a first version of is the Belgium telecom operator The Base Company. A summary of the case study can be found here. The author, Jurgen de Smet, did a webinar with the head of IT, Luc Schillebeeckx which can be found here. The Base Company team also made an one year in the adoption video, which you can find here.

The last month, quite a lot of LeSS communities got started. Great to see that. We list the communities we are aware of at the LeSS site here. The new communities are:

For those interested in create continuous improvement cultures, we'd recommend the Toyota Kata book and the following resources:

More on Toyota Kata in a future newsletter. When I started as a programmer with XP and Scrum (late 90s) Agile was not that popular. People would just turn around and walk away when I said that we were going to produce working software in 4 weeks. People would say "yeah right, that will never work here, that is way too simple". Nowadays people tell me the same thing when talking to them about Large Scale Scrum; I guess LeSS takes some to sink in.

From those days until now I worked at various consulting companies and in lots of positions too. I worked as a product manager, lead architect, Scrum Master, programmer, Agile Coach and even as a Lean Expert (although not very proud of that).

The last eight years I am traveling a lot for coaching Large Scale Scrum adoptions and teaching certified LeSS and Scrum.org classes. What I enjoy is helping people develop themselves and their organisation; to me it is all about renewal from within.

When I am not coaching or teaching I am enjoying family life. Next to that I like to do some writing and public speaking too. I wrote numerous papers on Agile and also wrote a booklet called 'EMERGENT - Lean Agile adoption for an innovation workplace'. And I am currently finishing a Scrum Patterns book which I am co-authoring with the ScrumPlop group. 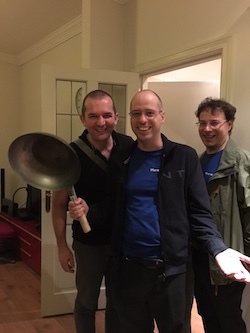 I co-organised the first ever ALE and ALE Bathtub conference. Last year I also co-organised the first LeSS conference in Amsterdam, which I enjoyed. The conference had a special LeSS trainer only 'Walk-The-Wok' event. The event is about cooking at scale. As you can see Viktor, Ran and Bas won it and had the honour of Walking-The-Wok in Amsterdam.  This year they will be challenged and the winners get the honour of walking-the-wok in London. (Bas will bring THE Wok from Sinqapore to London)

I enjoyed being part of the Agile community for all those years. I think that we probably moved from a state in which writing software was for nerds and management for suits, to a situation where writing software is 'sexy' (it is ok these days to admit in a bar that you're into software) and management is about nerds talking and writing about it.

Looking forward to working with you and you can find more about me at agilix.nl.